As you can imagine, Moscow is heavily into the New Year holiday at the moment, but I have been able to have a chat with BVV, now please understand, that translating a conversation where I speak English and he speaks Russian about such technical details does have drawbacks, however, here is the gist of it - at the moment information about the parameters of the shells is stored in the file damageModel.blk, the conclusions drawn based on other files may be erroneous. As for the connection of the inclined armor of the IS-6 and the fall of the penetration at an angle for similar projectiles, it does not exist, these settings for the armour angle of 29 degrees were in the file and were used one year before the IS-6 was added to the game. These values were based on the effect of a hit against the sloped front on a T-54, but it is also relevant regarding the Soviet 100mm or 122mm APDS shells in striking the American M60, where there is also an angle of inclination on the upper plate at an angle slightly greater than 60 degrees.

This adjustment is based on several facts known to us - test reports of US and British sub-calibre projectiles, where it becomes clear that the barrier equivalent to the frontal armor of the T-54 body (120mm / 60 degrees, tested on a 5 inch plate) was particularly difficult in penetration for sub-calibre shells of similar design, and increasing the angle of shell vs armour greatly increased the probability of non-penetration.

One source readily available is "Armor and Gunnery - Lorrin Rexford Bird & Robert D. Livingston" , where it shows relevant graphs of the angle of the meeting - the effect of tilt for different types of projectiles. This also demonstrates a sharp increase in the protective effect when the slope angle of the plate is reduced to less than 30 degrees. 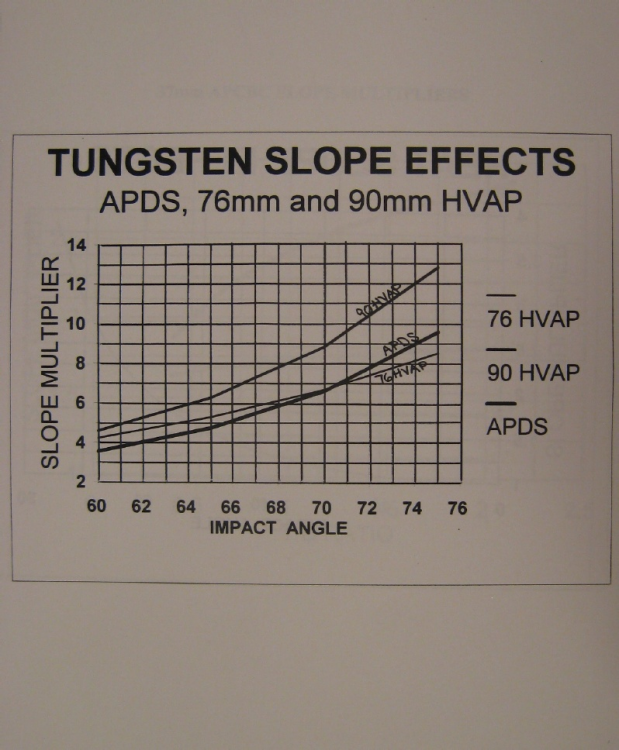 Now I want to make a couple of things clear, our development team do not go out of there way to implement  any kind of bias, they strive to get hold of documents and publications from across the globe, some are difficult to obtain, some are easy, but one thing is clear, few show the same results accurately. If material can be obtained via sourcing with help from you guys, then we will use it. It is also clear that bias seems to operate from the players side too, the observation made by some here, is that this is deliberately done to disadvantage British vehicles, no, it really isn't as it also affects Soviet vehicles too, not to mention that the mechanics were in place long before the IS6 arrived. Data mining is great fun isnt it? But it only reflects data being interpreted in a player viewed manner, the problem with that is that it is a tool where relationships with other data is specifically tasked by our developers. Additionally, to those howling about having their posts warned/hidden - follow the rules, stay on topic and discuss it like civilised human beings and they wont be warned/hidden. Simple.

If there is relevant data, then pass it to the development team via the reporting procedure. Now chill out and enjoy the holiday period.